Apple Maps: Must Know Features When You're Driving

The popularity of iPhone also boasts the use of the Maps app. We're used to typing in the destination and let the Maps app show us the way and get there via turn-by-turn spoken navigation. Apple also attaches importance to its mapping service, rolling out exclusive features to Apple Maps in iOS 11.

If you're using Apple Maps to get you to the destination, these new features will come in handy for you. In case you don't know about them, let me introduce these new features on the Maps if you've upgraded your iPhone to iOS 11. Now, let's dive in.

No Disturbance When Driving

Undoubtedly, it's a great danger to be distracted by Notifications or incoming calls when you're driving on the way. To avoid any potential risky disturbance, Apple has introduced the "Do Not Disturb While Driving" option, which is described as following:

"Do Not Disturb while driving can automatically detect that you might be driving, and silences incoming notifications and keeps your iPhone screen dark. To keep you from waking your iPhone while you drive, notifications will not appear on the lock screen. You can configure a custom automatic reply in Messages for a group of people you define - your Favorites by default - so that uou won't feel pressured to immediately answer text messages. They also have the ability to mark a message as "urgent" on the chance that the notification needs to be let through."

To enable this option, navigate to "Settings" > "Do Not Disturb". Tap under "DO NOT DISTURB WHILE DRIVING". There are three choices: Show Compass to Ensure Your Way

You may have bumped into such an awkwardness when driving a car that you're in the middle of a road but don't know which way is correct, even if the guide board show the name of the road. Yup, it's not easy to make a right decision when you don't know East, West, South, North.

Therefore, it's recommended to enable the "Compass" feature as to make it display a compass on your moving card to tell you which orientation you're heading. To turn this on, you should go to "Settings" > "Maps" >"Driving & Navigation", and then toggle "Compass" on. Now, I'm sure you will take fewer detours. 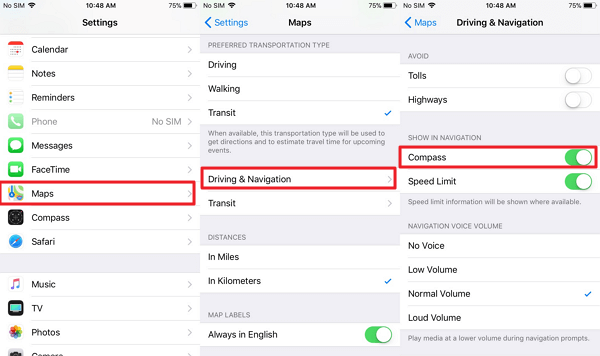 Somehow it happens that we drive over the speed limit and get fined, for we miss the speed limit sign along the way. Thus, a speed limit indicator is of great importance. Thankfully, this feature eventually comes out in iOS 11.

When you're driving and being navigated by Apple Maps on your iPhone, Maps will tell you the speed limit of whatever road you take. To enable this feature, you should go to "Settings" > "Maps" > "Driving & Navigation", and then toggle on "Speed Limit" under "SHOW IN NAVIGATION". Also, it works with turn-by-turn spoken directions. Lane Guidance To Avoid Missing Out

Apple Maps helps you find the way to your destination through turn-by-turn spoken directions. However, before iOS 11, Maps will not show you which lane you should be in but prompt with voices instead, which makes it easy for drivers to get in the wrong way.

Now, iOS 11 comes out with Lane Guidance. During turn-by-turn spoken directions, the current lanes will be shown on the top of the screen showing you which lane should you be in. Along the way, it can factor in real-time traffic information, so you'll know exactly how long until you arrive. These are the must-know features on Apple Maps. Hope it helps you. I'm sure Apple Maps will stick to improving user experience in the future. So, let's anticipate what's coming in the next iOS.

Advance Notice: The next article is App Store Has New Upgrades on iOS 11 You May Not Know.