How to Disable Siri Completely on iPhone & iPad

It goes without questions that Siri voice assistant brings a lot of amazing and interesting features. However, there are still some people wish to turn off Siri assistant for individual preferences and whatever reason.

How to Turn-off Siri Completely

Siri is turned ON by default. And the instructions to disable Siri go the same way for iPhone and iPad running all versions of iOS.

1. Launch Settings app in iPhone/iPad, than go to "General."

2. Tap on "Siri" to enter Siri settings screen. On the top windows, flip the switch of Siri to OFF position.

3. When prompted, confirm that you would like to disable Siri by taping on "Turn Off Siri." Then you can exit the screen as usual. 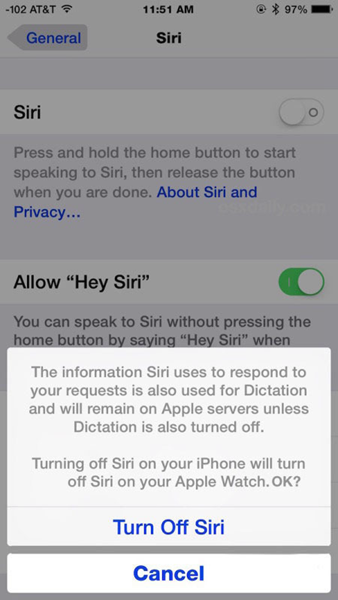 Indeed, it's so easy to turn off Siri. However, in my point of views, Siri is so helpful that I would not choose to disable it completely if not necessary.  And if you would like to take advantage of Siri again one day, you're entitled to reactivate it with the same route and flip the switch of Siri back to ON status.  For me personally, I really enjoy its brilliant function. Instead of disabling Siri completely, I would choose to turn off "Hey, Siri" voice activation to prevent it from randomly talking in case of inadvertent touch. Hope this is also applicable to you.