Google introduced two new smartphones, the Nexus 5X with a 5.2-inch display, and Nexus 6P with a 5.7-inch screen, at its product event on Tuesday. Alongside today's suite of Nexus phone announcements, Google also announced two new Chromecast streaming gadgets, one for streaming video and photos to a TV, and one for streaming music to any standard speakers.

Now, let's see some details of these gadgets.

The Nexus 6P and Nexus 5X are the first smartphones that will be sold with Android's "Marshmallow." They also feature updates such as fingerprint scanners, the new Nexus camera and Android's improved personal assistant, Google Now.

Google unveiled the Huawei-made Nexus 6P, all-metal-body device with a 5.7-inch display, slightly bigger than the iPhone 6 Plus. The Nexus 5X is the successor to the Nexus 5 and is made by LG. It has a 5.2-inch display and weighs 136 grams.

Google will sell both as unlocked phones, which means they can be purchased directly from Google or a partner retailer and used at a wide variety of wireless carriers. Both phones will also be compatible with Google's Project Fi WiFi service, and will utilize Android's Marshmallow operating system and fingerprint technology. The Nexus 5X will retail for $379, and the Nexus 6P for $499, both with a $50 Google Play credit and a free three-month subscription to Google Music. 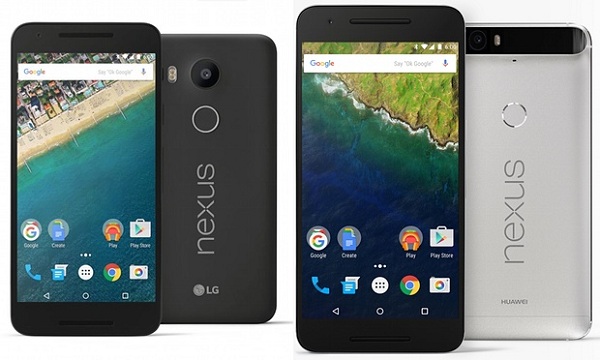 The Chromecast, a little stick that lets users stream just about anything to a TV, has gotten an update. The new Chromecast 2 supports 5GHz Wi-Fi, making it significantly faster. Three different antennas, as opposed to the original Chromecast's one, are optimized for Wi-Fi streaming. Stylistically, the Chromecast looks different too: it's now a small disc with a bendable HDMI arm that allows it to hang further away from your TV than the previous Chromecast. It comes in three colors: red, yellow, and black. Like the first Chromecast, it will cost $35. Some new features will roll out next year, but the Chromecast itself will be available today in 17 countries. 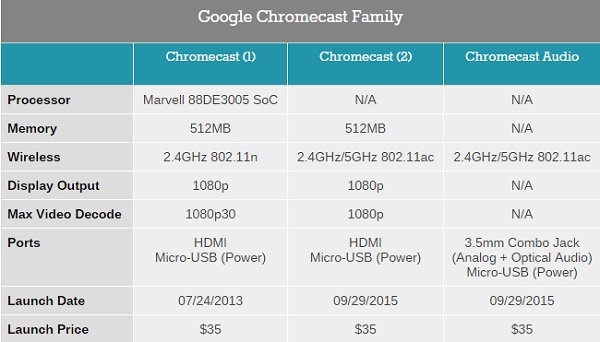 Google’s first Chromecast Audio operates in a similar manner to the video version of Chromecast, but connects to a pair of speakers or a hi-fi via a 3.5mm line out, optical out or standard phono (RCA) jacks.

The Chromecast Audio will support any audio streaming over Google Cast including Google’s Play Music, Deezer and TuneIn radio. Spotify also announced Chromecast support, while BBC Radio player support will be added in the near future.

Google is also working on multi-room audio streaming using the Chromecast Audio, but it will not support the popular feature out of the box.

The newest version of Android, Android 6.0 Marshmallow, will begin rolling out to users next week. This Android OS aims to make notifications more consistent and search functions more intuitive, while improving battery life and giving users more fine-grained privacy controls. The most prominent feature is probably Now on Tap, which integrates Google searches and voice interaction into individual apps.

As usual, Nexus users will get the Marshmallow updates right away, while carriers and other smartphone brands will make their own tweaks and roll it out further down the line.