There are always new smartphones, tablets and computers emerging in the mobile world with more and more stunning functions. As one of the leading and mostly sought after brands, Apple is not willing to fall behind. Hence, iPad Air 3 is rumored to be unveiled in an event on March 15, 2016. Although there is no official statement regarding the release of iPad Air 3, many fans can't wait to find out what are the enhancements iPad Air 3 will bring compared to its predecessor - iPad Air 2?  Let's figure it out side by side to see whether it is worthy of listing in your purchasing menu.

Rumors claim that iPad Air 3 is expected to have the same screen size with iPad Air 2 which sports a 9.7-inch Retina display with a resolution of 2048 by 1536 pixels. It is also said that iPad Air will support 4K display that its predecessor can’t do.

The leaked schematic of the iPad Air 3 indicates that the appearance of the new iPad looks like the iPad Pro. A smart connector on the left-hand edge is designed for attaching a smart keyboard cover. According to the leaked image, there are four speakers on iPad Air 3: two speakers at the top ends of the tablet and the other two at the bottom.

One feature that gives iPad Air 3 merit over its forerunner lies in its compatibility with Apple Pencil which is a unique selling point for Apple's expensive tablet. As we know, by now only iPad Pro works with Pencil. However, it seems that a great number of iPad Air users are inclined to be able to use the Pencil. As a result, iPad Air 3 is rumored to be compatible with Apple Pencil.

According to Apple's design preferences, iPad Air 3 is expected to be thinner than its predecessor. It is said that the small battery of iPad Air 3 contribute a lot in shrinking its thickness to just 5mm which is about 1.1mm thinner than iPad Air 2 with 6.1mm thickness.

It seems like the water and dust resistant function have been becoming the more and more sought after. Not only the Samsung Galaxy S7 has water-proof feature, the incoming iPad Air 3 may including waterproof and dust-resistant features too. 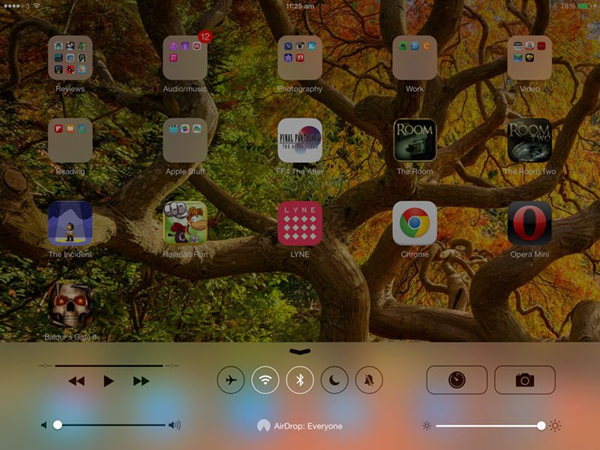 The iPad Air 2 is equipped with an 8-megapixel iSight camera without a flash and a 1.2-megapixel FaceTime camera. Rumors suggest that iPad Air 3 will come with a flash in the 8-megapixel iSight camera, making its rear-facing camera more effective in low-light conditions. The great story is that the FaceTime camera is increased to 2.1-megapixel. What a boost! If you are demanding in the resolution when using FaceTime with family and friends, iPad Air 3 is your better choice.

A great boost of iPad Air screen has long been an eye-catching point among Apple customer and also a step that Apple is devoting its effort to. Rumors reckons that iPad Air 3 will make a big move up to 401 pixels per inch, making the 9.7-inch screen into a resolution of 3112 by 2334.  Although iPad Air 2 has the same 9.7-inch display, it owns only 2048 by 1536 resolution at 264 ppi.

iPad Air 2 is equipped with A8X processor, which offers faster performance than the iPad Air 1’s A7 chip up to 2.5x graphics. And we're already up to the A9X on the iPad Pro, so there is chance that iPad Air 3 will come with minimum and quite possibly an A10 chip with speedy operation. If you want your iPad runs more smoothly, iPad Air 3 will surely meet your satisfaction.

It seems like that Apple are devoting itself in making more and more small size of battery in order to make iPad more portable. iPad Air 2 is equipped with a 27.3-watt-hour batter which smaller than Air 1 but retaining the same usage time. Rumors suggest that iPad Air 3 will come with an even smaller batter in size with the same usage time.

The iPad Air 2 is available in Silver, Gold and Space Gray color options. Rumors claim that the iPad Air 3 may also come in a Rose Gold color option.

The price of iPad differs depending of its internal storage and available network type. For example, iPad Air 2 cost $555 for 16GB, $667 for 64GB and $778 for 128 GB in Wi-Fi and add about $139 at each configuration of the 3G or cellular models. There is chance that iPad Air 2 will be sold at a reduced price after the release of iPad Air 3 which will becoming the new sought-after model. It is rumored that this new iPad will cost starting from $580 for 16GB. It seems not an unaffordable price for many of you.

iPad Air 3 and iPad Air 2, which one is your favorite? Leave your opinions on comments!