Many companies collect data that a user never authorizes. The organizations justify it through various terms and conditions, usage agreements and other methods that might fulfill the letter of the law, but not its spirit. For people who are tired of having all of their information collected and tracked, virtual private networks offer a welcome reprieve. They act as the go-between that sits between a person and the public Internet. When they route their traffic through the VPN service, it's encrypted and sent through the VPN service provider's servers. By the time it gets to the public Internet, it may have gone through multiple VPN server locations. While all VPN providers offer some level of improved privacy, these five VPN services are the ones that go above and beyond and have availability on Android devices.

Perfect Privacy makes it obvious that this is its primary focus. When a user needs security and privacy to be as high as possible, they have a lot of features to work with on this platform. The first thing that this VPN has going for it is its location, which is in Switzerland. It has a multi-hop VPN that makes it incredibly difficult to figure out what the origin point fo the traffic is. As part of this functionality, neurorouting uses a dynamic system to send a user's traffic through the various VPN servers. TrackStop takes away the opportunity for malware and phishing attacks to land, as those sites are blocked entirely.

The VPN app gives users customization options with the DNS and stops IP addresses from leaking. They keep no logs at all, and have good performance even with all of the privacy features available. It is pricier than other options on the market, and it's not known for working well with Netflix and similar services.

VyprVPN is a privacy minded VPN service that also offers a great balance between privacy and performance. This is another one based in Switzerland, and they offer an excellent Android experience. With VyprVPN, they are definitely designed properly to support mobile Internet usage and privacy. Users can select the security protocol they'd like to use, which allows power users to set up privacy features to their liking.

Several features promote more privacy on this VPN. The kill switch is a great tool for stopping users from continuing to use the Internet if the VPN connection gets lost. If they connect to public Wi-Fi networks or other risky connections, then the VPN can be set up to automatically turn on. This company even made their own VPN protocol, called Chameleon, which demonstrates their understanding and expertise of this software market.

Surfshark has a lot of good things going for it on the privacy front, making it the best Android VPN. The CleanWeb feature strips out malware, ads, and phishing from the user's online experience. Blocking these privacy threats acts as a first line defense to the Internet connection. It supports unlimited data and unlimited devices, so users don't have to feel constrained or ratio their VPN service across their electronics. The WhiteLister function makes it easy to connect with VPN-blocking resources, without dropping the VPN entirely.

The no-logs policy that Surfshark has means that even if a hacker broke in or law enforcement demanded information, there is nothing that the company can provide. A kill switch is a proactive way of stopping privacy-destroying actions if a VPN connection goes down. A private DNS is used on each of Surfshark's many servers, and it protects against IP leaks. Camouflage mode is interesting, as it tricks the Internet Service Provider into not realizing that the traffic going through that service is VPN traffic. For certain providers that attempt to throttle VPN connections, this circumvents those measures. Multi-hop takes a user's connection through multiple servers to give them more privacy. The AES 256 bit encryption offers strong security. 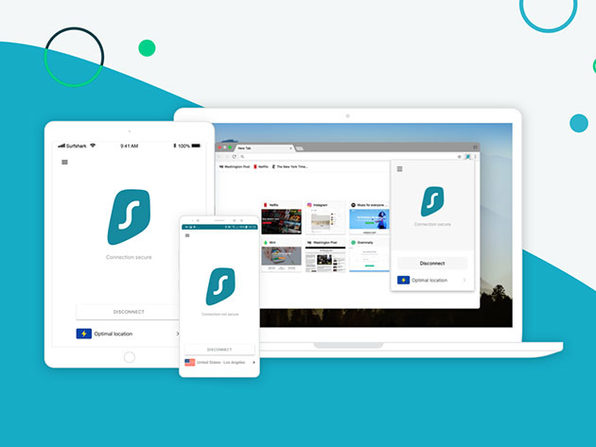 With the combination of performance, privacy, and a great price, Surfshark stands out as a great VPN investment.

NordVPN is a user-friendly VPN that boosts privacy through a double VPN mode, which essentially takes the user's traffic through more than one server before it hits the public web. The company doesn't keep logs, and will automatically route mobile Wi-Fi traffic through the VPN app if the user would prefer. While this VPN service has many privacy features, the Android app feels a bit lacking compared to the desktop experience. That's not to say that this company couldn't improve that part of its operations over time, however. It offers good customer support and an affordable price.

NordVPN has more than 5,000 server locations, which makes it one of the largest offerings on the market. It's headquartered in Panama, which is favorable for privacy. One feature that's particularly great for privacy is Onion support for TOR traffic. NordVPN goes through public audits by independent firms to prove things like its no-logging policy.

When you're looking for a well-rounded VPN for privacy, Express VPN is a solid selection. One of its most inviting features is how easy the Android app is to use. It's clearly designed with a lot of thought towards the mobile experience, which leads to seamless operation so the user is always protected while they browse. The AES 256-bit encryption is great for security, but this VPN unfortunately lacks a kill switch. If the VPN connection is lost during a browsing session, the user's activity could be unintentionally exposed. The performance is great and it also has a location picking service, which matches a user to the best server location for their intended VPN usage. The pricing is mid-range, which reflects the offering fairly accurately. It might not be the most privacy minded VPN on the list, but it does have other compelling features to make up for that.

It's only going to get harder to maintain privacy on the Internet. VPN services play a vital role in allowing people to pick and choose how much they want to share with the public Internet and the companies that they do business with.

I have tried several providers, and I liked two: Express and Nord. They are identical, in my opinion. I came up with Nord, as it had a little less affect on my phones performance and was cheaper. I got it with a unique discount code salenord, and as far as I know, it's still working, so hope it will be useful 🙂