The sound of constantly cheering and snapping on the spot keeps reminding us of this breath-taking conference and how it's going to change this planet. As one of the world's top tech conferences, Google I/O has been drawing spotlights over the world.

Now, I'm going to break down all the keynotes mentioned in the Google I/0 2017. And, I'd inform you at the very beginning that what's down there is going to stun you and blow you away!

1. Google Assistance: The Apple of Google

As Android is stepping off the stage, Google Assistant now is sparking in the conference, growing to be the spotlight of Google I/O.

Google Lens
Sundar Pichai, Google CEO, didn't beat around the bush this time. Right after the "Achievement Completed" part, he brought Google Lens to us, a new feature based on AI (Artificial Intelligence) technology.

With the help of Google Lens and your mobile phone camera, the Google Assistant will be able to analyze your surroundings and show relevant information on the screen. For example, if you're wandering on the road of the countryside and see an attracting flower which you have no idea what it is, you can turn on Google Lens and aim at this flower so that Google Assistant will tell you all the relevant things about it. Awesome, right?

Apart from this, Google Lens also is featured with OCR (Optical Character Recognition), which enables to directly read and extract information from your surroundings, like the auto connection of the Wi-Fi via shooting the router.

Better yet, if you're traveling abroad, you can take out Google Lens and zoom in on the text in the foreign language. Then, a direct translation will be displayed on your screen. That's no doubt that Google Assistant is playing an important role in bridging linguistic differences. 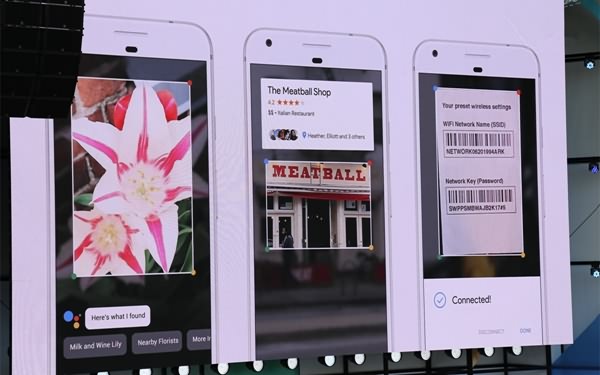 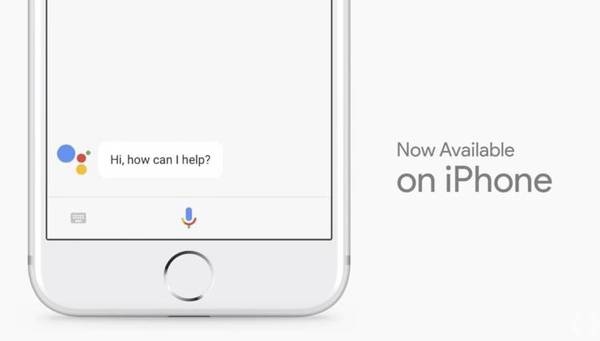 More Smart Home Partners
Google is dedicated to winning supports from a range of companies/industries as to partner with Google Assistant in terms of Smart Home. As shown in the conference, Google Assistant now has over 70 smart home partners. It makes me wonder that the day we sit still on the sofa and give demends to each household appliances asking them to do all the things is no more far away. 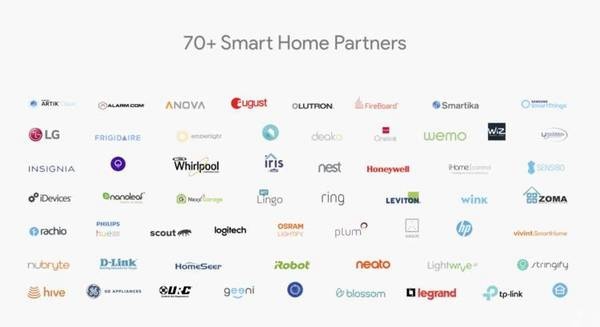 Over the past years, Google has made great progress in machine learning techniques, which immensely improves the quality of Google Translation and makes differences on Google Search Engine. However, the first generation of TPU (Tensor Processing Unit) costs a lot in terms of different ways.

That's why the next generation of TPU was unveiled during the opening remarks of the I/O keynote. Pichai states that this specially designed chip for machine learning works on the company's TensorFlow platform.

Pichai was quick to hammer home the point that his company's future depends on artificial intelligence, specifically the machine learning techniques that let algorithms learn on their own and improve over time. 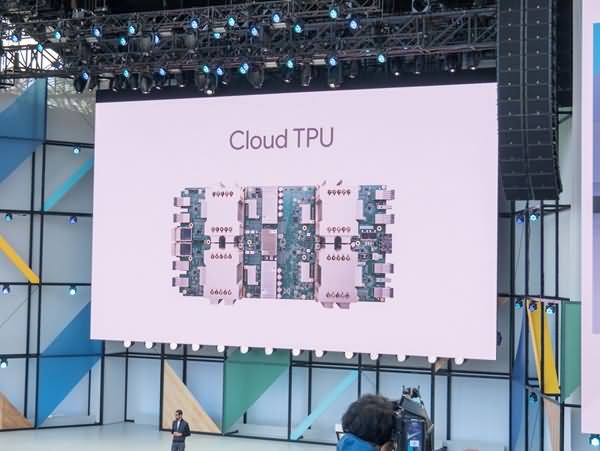 The initial concept of Google Home is to set your hands free. With the help of Google Assistant, it tend to allow you to do more things with your mouth speaking. Though we didn't see an enhanced Google Home in terms of hardware this time, its concept has been further achieved.

Hands-Free Calling
Users can make calls through Google Home now. This important feature is known as 'Hands-Free Calling'. You can directly say "Hey Google, call Mom" and then Google Home will dial your mom. Also, Speech Recognition Technology is able to make out who gives the demend so that others won't call the "same mom".

Now, this feature is only available in the United States and Canada free of charge. By default, Google Home is tied with a private number, however, there is an option for you to tie it to your own phone number. Better yet, phone calls support Home's multi-user setup. Only outgoing calls will be available at launch, as Google is taking a cautious approach to avoid privacy headaches. 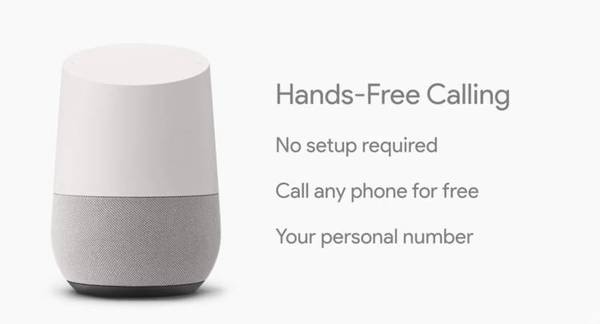 More Upcoming Features
Aside from Hands-Free Calling, Google Home now enables users to check out all kinds of information like flights, calendar, and events. Furthermore, Google Home supports Bluetooth at last, which means you can use it to play music on your phone. There is a new update - "Visual Responses", which allows Google Home to connect with any screens and show you a bigger world. 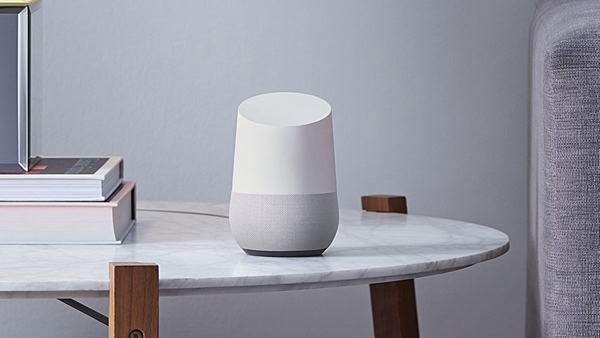 Within less than 2 years, Google Photos enjoys monthly active users of over half billion thanks to its large free cloud storage and outstanding experience. Reportedly, there are over 1.2 billion photos and videos uploaded every day.

Suggested Sharing
In the Google I/O 2017, this services has been rolling out more features. Above all, it's Suggested Sharing. With machine learning techniques, Google Photos is able to recognize people in your photos. Though Google doesn't know who he/she is, it would have done a series of SMART prediction.

If you've sent a specific person to the same phone number or email address, Google Photos will prompt you to share the photos including this person taken next time to the phone number or email address.
Moreover, if your friends are using Google Photos, they can one-click to save those including themselves to their own cloud. I believe this feature is much helpful in parties. 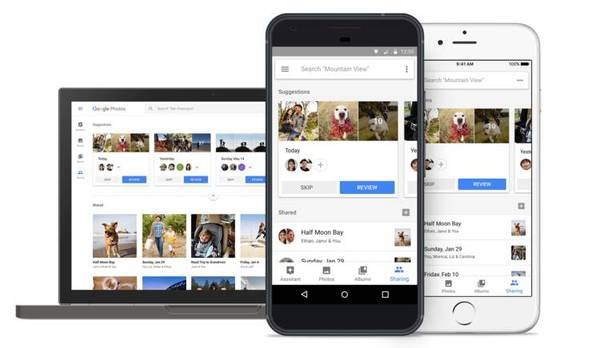 Shared Libraries
The second feature is Shared Libraries. It allows you to set up your Google Photos and auto-share some certain photos to people. For example, you can set up to share pictures of your kids to your wife/husband.

You are able to share the whole album or some to people. Once people are invited, they will be kept up to date with the photos you share with them.

Pair with Google Lens
As we've mentioned above, Google Lens is a powerful new feature. Now, it can even work with Google Photos. People are used to taking photos with things left undone or about to complete, such as to-do list, to-read books, to-purchase items and so on. You can activate Google Lens in Google Photos. After photos taking, pictures will automatically be uploaded to cloud. This update will come out later in this year.

In addition, Google Photos is going to offer "Photo Books" service, which is to make a real album for users. Google expects that people would purchase this service as a gift to their beloved ones. The price starts at $9.9 with 20 pages of respectively 7 inches or 20 inches. When the album exceeds 20 pages, Google charges $0.35 ~ $0.65 for per page.

When introducing Android O, Dave Burke speaks with a faster tone leaving a small amount of time to Android things. Beyond doubt, the leading character of Google I/O is changed.

Google released its preview program for Android O to developers in March this year, and the first beta is being released in the conference. However, since Android 5.0, each new iteration of Android doesn't seem to have bigger improvements with the majority of optimization upgrade.

That's true of Android O, it's indeed hard to tell the differences from Android N. Android N has already supported multiple tasks on the same screen. Though two programs will be only separated from the upper and lower screens with few apps supported.

So, Picture-in-Picture comes. It's more practical and desirable. When the app that supports this feature is running, you can press "Home" button and it's 'gone'. However, videos being played will be still displayed on the screen as a small window. It's movable and causes no interruption with other programs. To exit, users just have to swipe down the screen.

Notification Dots
In addition, Android O brings a feature that you might have seen on other cell phones. That being said, it's Notification Dots. Actually, it resembles 3D Touch on iOS devices in many ways.

Let's take Instagram as an example. In the past, you can pull down the notification bar to check out the latest notifications while now the number of notifications will be displayed in the right corner of the app icon and you can check them out with a long pressdown on the app. 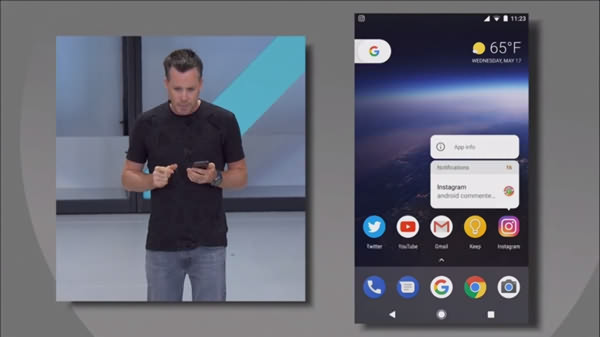 Smart Text Selection
This is another feature on the basis of Artificial Intelligence. For instance, as you copy a whole text from the mail, the system will the Google Maps option will automatically pop up allowing to go on with more information if the address is included in the whole text. If there is a phone number, you will be asked to make a call. 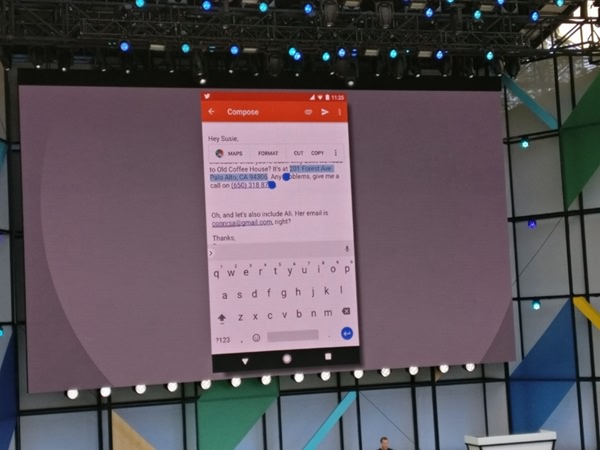 GBoard with 191 Languages Supported
GBoard is now working with 191 kinds of languages. With its translation feature, you can enter the text of a certain language and instead get the text of another language in a direct way. It means that you don't need a dictionary app anymore even if you're chatting with a foreigner.

As opposed to the previous rumors, AR (Augmented Reality) and VR (Virtual Reality) didn't take up many sliders this time. Google's VR ambitions are expanding beyond Daydream's current form, which involves strapping your smartphone to your face.

Google has leaked out that the upcoming VR headsets won't need a smartphone or computer to have the virtual experience. Yes, it means that the headset is going to be a standalone wearable device. Just put it on and it can start to take you into the brand new world. However, whether this would become a reality is still a puzzle.

After reading all these, don't you think this world is becoming more and more fictional? Technology is changing our life and the whole world and either you and I should be glad to witness all these changes.