Apple Maps was first introduced in 2012 as Apple's built-in mapping service to take the place of Google Maps. Many as it received criticisms at first, Apple Maps is now getting better and better. With the arrival of iOS 11, the Maps app on iPhone also enjoys improvements. There are a few tricks that are new in iOS 11, but you may not know them so far. Let's see whether you know these unknown features.

Zoom In and Out with A Single Finger

We used to tap on the iPhone Maps app with two fingers or both hands. To be honest, it's really handy and convenient to zoom in and out the current screen with a single hand. However, would it be possible to do so with a single finger? The answer is yes.

Apple knows your desire. It's now supported one-finger operation to zoom. In the first place, you should tap twice on the screen and keep tapping after that. Then, moving your finger upward or downward. (Upward to zoom in while downward to zoom out) 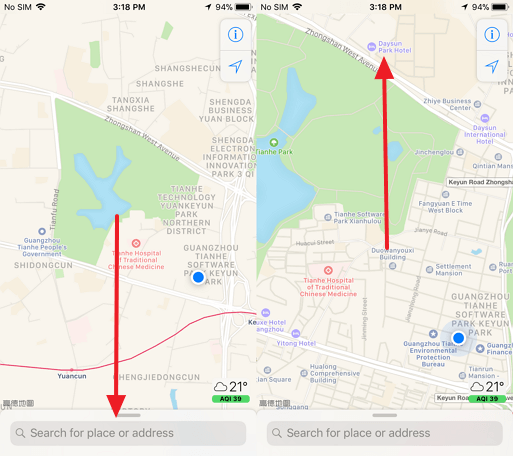 Show Your Direction When Walking

"I don't know why those maps apps show my location yet without directions? It's simply a dot on the map and how am I supposed to know the orientation I'm facing at present?"

Have you ever been confused which direction you're heading to even in the guidance of navigation? Despite having turn-by-turn spoken directions and proactive suggestions, some users are still inclined to get lost, for they don't even know the direction.

iOS 11 has brought the fix to this issue. Now, when you're walking, iPhone Maps app will show your real-time location as a dot on the map and at the same time a divergent light to point out your heading direction. That's really a considerate improvement, isn't it? 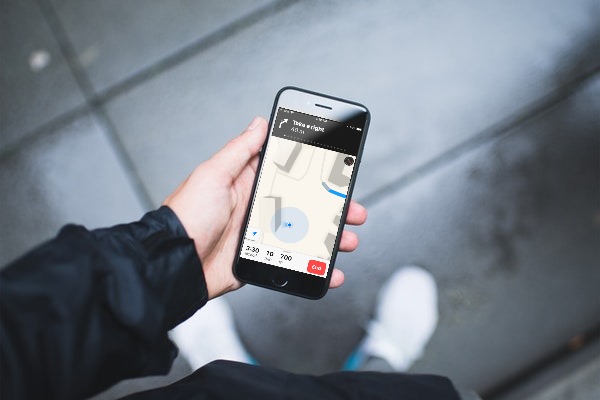 Know Weather of the Day in Different Times

In the previous iOS 10, Apple Maps app displays the real-time weather of the city in which you're located on the screen. The weather widget is on the lower right on the map. Now, iOS 11 allows users to tap on it as to gain more weather information.

When you long-press on the widget, a more specific window pops up showing the weather information like City Name, Today's Weather, Rainfall Probability, Current Temperature and Weather Conditions in 6 hours. Now you can have a better plan of a day. 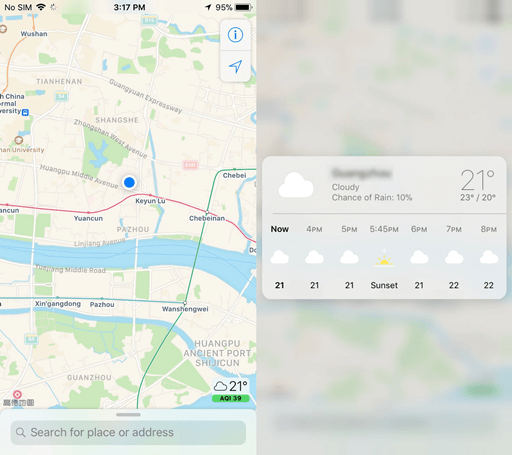 Indoor Maps to Fully Know Inside

Google recently introduces Indoor Maps for its mapping service. Before long, Apple has brought this indoor maps for its Apple Maps. Just like the way you get detailed directions outside, now users is able to get overall navigation with the full layout inside local landmarks, malls, airports, shopping centers and more. So, you cannot get lost in a building this time. 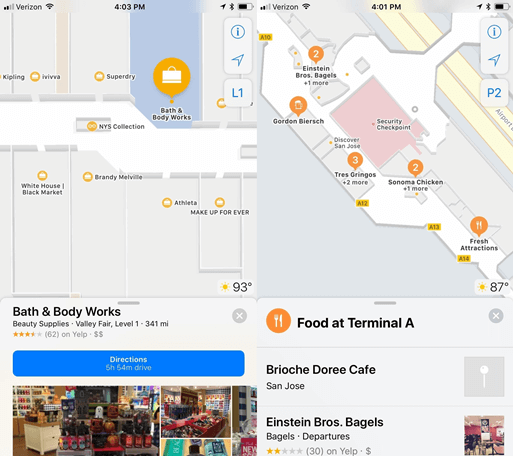 Did you ever dream of being a bird flying over where you live in? Or did you ever want to have an omniscient view to look at this world? Thanks to Apple's new ARKit framework, now your dream has come true.

iOS 11 rolls out with Flyover in the Maps app, which lets users enjoy photo-realistic and interactive 3D views as if viewing above the sky. Based on Augmented Reality technology, you can tilt, move or rotate your iPhone around to enjoy 360-degree views in different directions.

Flyover is available in certain regions in certain countries and workable on iPhone 7/7 Plus, 8/8 Plus and iPhone X, you can check here to see whether you can use Flyover in your region. I believe we're soon able to go sightseeing around the world while lying on the bed.

Apart from these features, the iPhone's Maps app has been improved in the condition that you're driving a car. If you want to know more, please keep your eyes on FonePaw.

Advance Notice: The next article is Apple Maps: Must Know Features When You're Driving.