The Highlight of Samsung Galaxy J1 mini Will Be Its System

At the mere mention of entry level phone, Samsung Galaxy J1 will pop up into your mind. At least Samsung is trustworthy at the area of ultra-low-end. Samsung Galaxy J1, which is $95 only, recently reaches the phone market. However, for the new version and better configuration of Samsung Galaxy J1 mini, will you pay more attention to it? 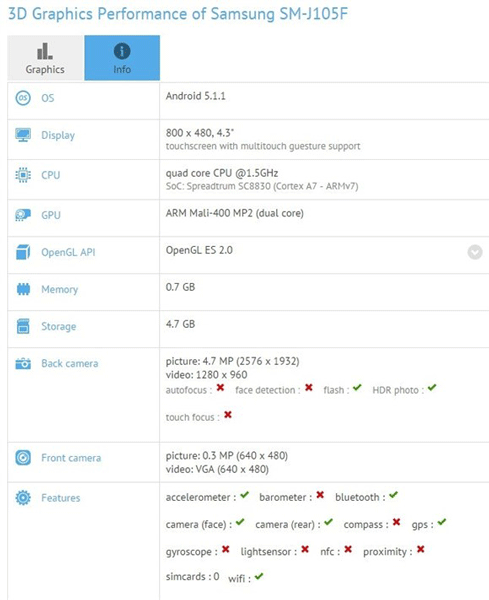 The mobile phone configuration of Samsung Galaxy J1 mini is better than J1, though it is hard to understand why the new one called "mini". The screen of J1 and J1 mini are both 4.3 inches in Super AMOLED display, both of resolutions are 800×480.

The processing chip of J1 mini, which is quad-core Spreadtrum of 1.5GHz, is better than J1's dual-core processor of 1.3GHz. Besides that, Samsung Galaxy J1 mini adopts 1GB RAM and 8GB internal stores, while J1 are 512MB RAM and 4GB. Both are 5 mega-pixel real camera and 2 mega-pixel front mounted camera. However, J1 mini's resolution is VGA, which is more distinct than J1. The most different between them is that Galaxy J1 mini is Android 5.1.1 while Galaxy J1 is Android 4.4.

Samsung Galaxy J1 mini now is showing at the official website, the ID of it is SM-J105F, which is same as GFXBenth's. But for the releasing date and price, we need to wait a period time still. Although Samsung supports the latest Android 6.0, but it will only for limited devices either.