After releasing the device-support list for Android 6.0, more and more devices supported Android 6.0 including the HTC One, Nexus 5X and Nexus 6P. But the users complain the incomplete list about Samsung devices, which can be updated to Android 6.0 actually but not in the list. Check the latest one: 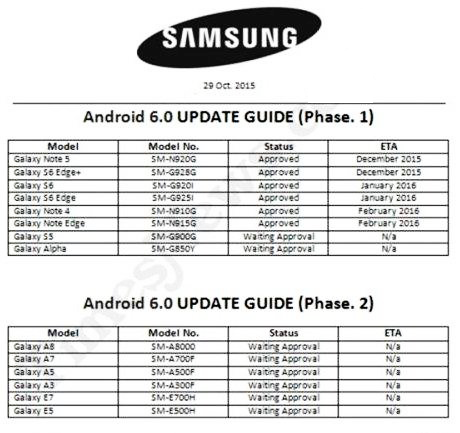 Samsung Galaxy Note 5 and Samsung S6 edge+ are also facilitated users to upgrade the system to Android 6.0 in December of this year. The other versions including Samsung S6, S6 edge, Note 4, Note Edge, etc. will appear in the list either. As far as Samsung S5, it was added into the list but without exactly date for upgrading.

Besides above, the series of Samsung A8, A7, A5, A3 and E7, E5 are be one of the members successfully in the updated list. But the problem is that different kinds of version of devices will receive the notification of updating in different time.

Of course, if you are on the way to purchase a Samsung phone, either for Android 6.0, why not consider to buy it later after Android 6.0 released.