Windows 10 launched on July 29th and has already been downloaded over 67 million times this morning. While Windows 10 got mostly good reviews from the media and the general public, most did mention that the operating system still has some bugs. Here we list 4 bugs or issues users encountered while upgrading their computer to Windows 10.

Although Window 10 officially launched several days, many are complaining that they haven't yet got the upgrade. Even if they pre-registered for the download at the beginning of June, they are still plugging away with Windows 8.1 or 7, hoping that a notification will pop up to tell them their PCs are ready to install the new operating system.

That’s mainly because Microsoft is sending out the upgrade in "waves" which ensure that its servers aren't completely overrun with requests. If you pre-registered, you are in a queue depending on when you requested your upgrade, so it will be served when it is your turn. It could be up to a week or longer.

80240020: Many users receive this error messages and according to Microsoft Answers forums moderator Vidyaranjan A V the error code, "is an expected message indicating that when installation begins it may require user interaction." He advises users to wait until the PC receives a notification that the upgrade is available.

User Denilson Alexandre Silva, who believes that the error message is caused by data corruption, has posted a solution that nevertheless appears to have helped several users. He recommends the following steps. 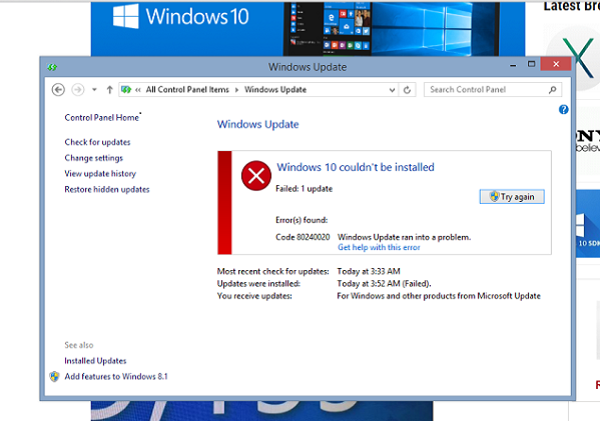 "So far, upgrade to #Windows10 has been pretty smooth on 5 year old PC except I can't use Cortana or install apps from the Windows store". — CheckedShirtMatt (@ec1matt) July 29, 2015

Maybe this is more of the Store app issue than being a Windows 10 operating system issue. The Windows 10 store app keeps on crashing when you try to download anything. The issue was reported by many – including TWC authors.

4. Wireless networks are not available

After you upgrade from Windows 8.1 to Windows 10 Pro or Windows 10 Enterprise, no wireless networks are available. The issue could affect Surface devices too.

What we have to mention at last is that Microsoft hasn't issued the official solutions for these bugs, but from Windows Central, the first big Windows 10 bug fix update could come as early as next week.

Also, in fact, there are not many bugs or known issues with Windows 10. If you know of anything more that can be included in the list, please comment.

It would appear that a quite fascinating thought, however the issue is, it will cost a ton to the property holder to take administrations of an expert inside decorator.
Also, read a blog by Robin
Content writing company