[idea] iPhone Home Screen Layouts Should Be Like This

As "No two leaves are alike", so the organizations of Home screen on iPhone vary from people to people. Everyone has his own idea to rearrange apps on iPhone. Somehow, the way you organize apps can tell what you are like.

There are creative ways to organize iPhone apps. Some like to arrange apps based on the color of apps, others put apps in alphabetical order. It's really interesting, however, not practical. If you want to improve the efficiency at best, here's a systematic and scientific way for your reference. 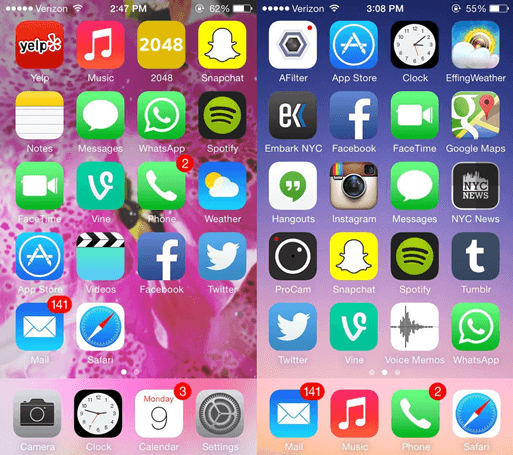 Quick access dock refers to the panel at the bottom of your home screen, which remains immovable when you're switching the home screens. The Dock can include up-to-four apps only. Due to its immovability, the Dock is therefore of a significant position. I recommend you to place the most frequently used apps in the Dock.

Those apps that we use a lot in a day are worth this place. Imagine that you use Instagram or WhatsApp quite frequently, placing them in the Dock can help you save the time of swiping and searching for apps. 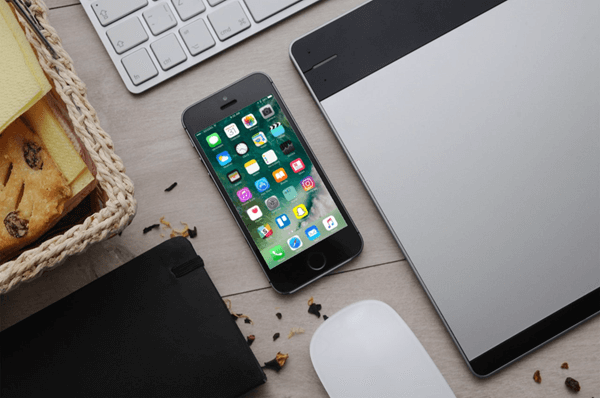 When you determine what apps to be in the Dock, let's get down to the first screen of Home Screen. The first screen always shows up when you're back to Home Screen from other apps. Therefore, I have a few ideas for you:

Since iOS gives the priority to the first screen, we should make the full use of it. The apps in the first screen should be able to directly launch and access. That's also why we exclude folders from here. In order to fully use the space, let's learn way around the Thumb Zone heat map applied to every iPhone display size as the following image shows. 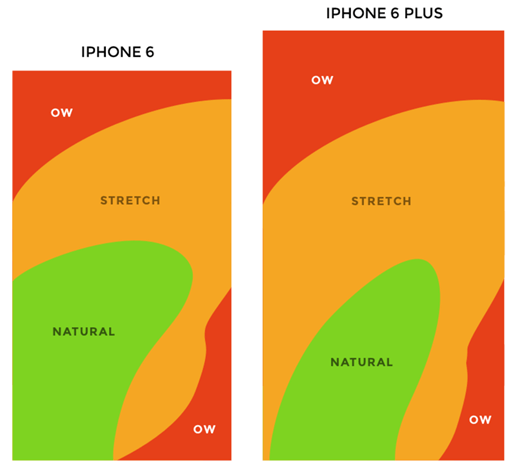 The green zone refers to the area that is easiest to access, followed by the orange zone. However, the red zone is the least accessible. Taking accessibility into consideration, you should follow the three ideas above to place apps in the first screen.

After you finish the Dock and first screen, you can throw the rest to the second screen. Certainly, I don't mean you can casually litter apps everywhere. You can place apps in the light of your use habit, colors and names of apps.

Also, I recommend you to move folders here which are named according to their functions, such as Games, Shopping, Funny Stuff, and so on. Furthermore, don't forget to take the Thumb Zone heat map into consideration. 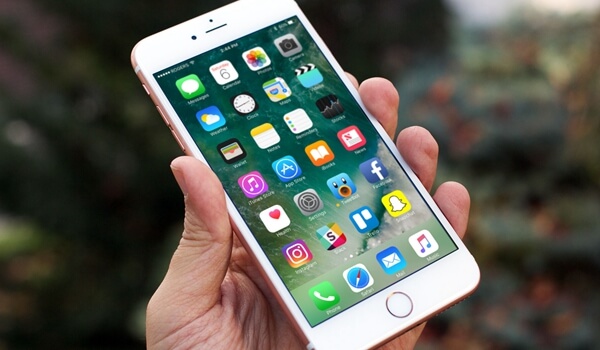 As a rule, most people are good with former 2 screens. So, what's the point of the third screen? Personally, I think it's a place where you should put new apps until the internship ends. There are new and attracting applications springing up all day long in App Store.

Some may catch your attention in the first place but may or may not be able to stick to you after being used for days or weeks. Therefore, the third screen is a good place for these unsettled apps. Some may not even be used for a day, so it's unnecessary to make room for them. If the app has proved its value, it would not be late to rearrange it at that time.

Sometimes it may be hard to locate an app among a full screen of apps and folders. When it comes to an app that is barely used, it gets harder. At that time, don't forget Siri and Spotlight. They are able to help you instantly open the desired app.

If you have many apps on iPhone, it's quite cumbersome to move apps one by one. iPhone doesn't give a smooth experience in moving apps and folders on iPhone, and therefore Apple should really work hard on it. Moreover, perhaps this is the reason why most people don't like to spare time organizing apps.

In fact, iTunes is able to help users arrange apps on iPhone after connected to the device. In order to do so, you can connect your iPhone to the latest version of iTunes and enter the "Summary" page via clicking on the "Phone-like" icon. Then, select the "Apps" option from the left panel and choose a screen to organize your apps. 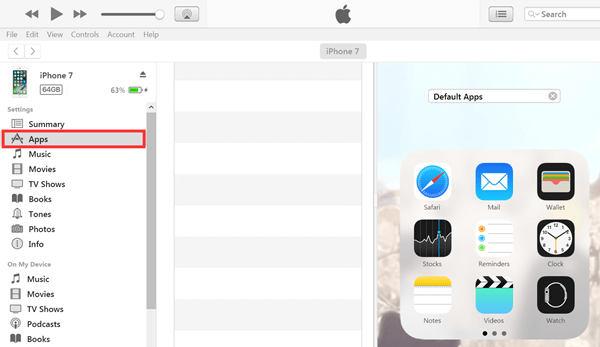 Everyone has his own thoughts. This essay is only a recommendation for increasing the efficacy of using apps. I'd be glad if you find it helpful. Also, why not share it with your friends?

Advance Notice: I'm going to show you how to turn your iPhone into a reader so that you can listen to your favorite books and enjoy them. Hope you'd like it.