How to Block Calls on Your Android Phone

There are times where you are bothered by some unwanted and annoying calls, for example, spam calls from a pitchman, continuous from a broken friend, and more. If you wish to get rid of such calls, you can block calls on your Android phones. Here is how to add your unwanted phone number. In this guide, we will take Samsung Galaxy S6 and LG G4 as examples.

You can block phone number already saved in your contact list. To reject a saved contact on your Android phone, please go as:
Step 1. Open the Phone app > Go to "Contacts".
Step 2. Choose a phone number you want to block and long tap on it.
Step 3. When the pop-up as the screenshot occurs, select "Add to reject list". Afterwards, hit "OK". The phone number will be added to the reject list. 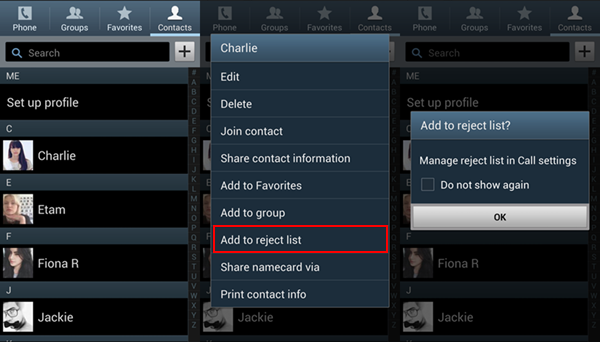 Also, you can add an unsaved call to the reject list. By doing this, you can prevent strangers or some spam calls from harassing you.
Step 1. Turn on Phone app > Go to "Call logs".
Step 2. Choose a phone number. Both the saved number and the unsaved ones are available.
Step 3. Log tap on the phone number and relieve until the pop-up occurs. Select "Reject call". The call will be added to reject list. 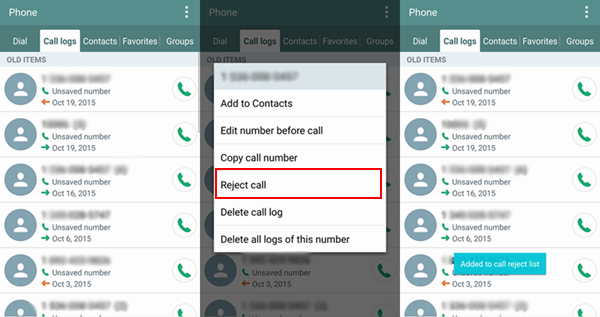 That's all. Operations on other Android phones like Sony, HTC, Motorola, and more are similar. Contacts which are added to your reject list won't bother you anymore. Reversely, you can remove them from the blacklist by following the similar steps and choose the option like "Remove from call reject list".