Most individuals who are using Windows 7, Windows 8 or Windows 8.1 have received Microsoft’s "Get Windows 10" advertisement, asking you to "reserve" your free upgrade to this new OS. There are a large number of people who are enthusiastic to get the upgrade now. But some cautious users are still waiting to know if they should upgrade Windows 7 to Windows 10.

In this article, we'll focus on comparing the big difference between Window 10, Window 7 and Windows 8. Hopefully it can help you make you decision. 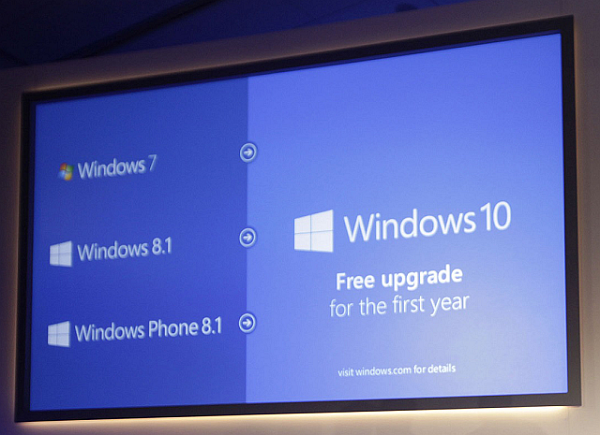 1. What Makes Windows 10 Worth The Upgrade

Cost - The biggest decision taken by Microsoft with Windows 10 was to offer the OS as a free upgrade to the vast majority of Windows 7 and Windows 8 users. By contrast, Windows 7 and Windows 8 have not been made free by Microsoft following Windows 10’s release and the company has no plans to make them so. In a word, it seems really a great deal because Windows 10 is not cheap and ‘Windows 10 Home’ and ‘Windows 10 Pro’ editions retail for $119 and $199 respectively.

Tips: For XP or Vista users Windows 10 will be a paid upgrade.

Flexibility - The Windows 10 OS will run across all devices - PC, Surface, tablet, phone, or even Xbox One. This means you can purchase an app from the Windows Store only once and run it on any Windows 10 devices.

Cortana – Windows 7 offers local searches (what is on the computer itself) and Window 8 offers online search baked into controversial Start Screen. Windows 10 easily trumps them both. The secret is Cortana. This intelligent assistant allows you to control elements of your PC by using your voice. Clicking on the search section of the Taskbar will open up Cortana. Thanks to the new universal search facility that incorporates the internet as well as your device, you can even make web queries from Cortana.

Gaming - Gamers will take heart that Windows brings with it DirectX 12 which brings a 10-20% performance gain over DX11. Moreover, Windows 10 has the ability to stream games from your Xbox One to your PC.

Virtual Desktops - With this neat feature you can use the Task View mode to easily create multiple workspaces on your PC and switch between them as if they were on different screens.

Edge Browser - Edge works significantly faster than Internet Explorer and is only available on Windows 10.

The Final version – Microsoft has made it clear that Windows 10 is set to be the last version of Windows. Much like Apple’s OS X, it seems like the edition of the OS is set to be a platform in its own right that the company can iterate on going forward. To understand it better, think of Gmail, Facebook or Twitter: longtime users know these services have changed over the years, but there aren’t “versions” of them. There is no Facebook 2 or Gmail 7.

2. What Makes It Worth Staying On Windows 7 Or Windows 8

Bugs and Bugs Everywhere - Right now Windows 10 is brand new and it has launch with some big bugs which you won't see in Windows 7 or Windows 8. By contrast Windows 7 and Windows 8 are pretty much rock solid these days.

No Touch, No Swipe, No Scroll – There are some new features in Windows 10, but the fact is that Windows 10 also kill some This won't affect too many users, but the fact is Windows 10 does kill some features Windows 7 and Windows 8 users consider essential. For example, if you upgrade Window 8.1 to Windows 10, you’ll find that you cannot close apps by just swiping it down from top to bottom or change the volume using the scroll bar from taskbar.

You're using Windows 7 – Actually, two of Window 10's big improvements over Windows 8 are the addition of a Windows 7-style Start menu and the ability to work entirely on the desktop and ignore the touch-focused Start screen. So if you currently use Windows 7, you've already got these and if you are happy with Window 7, why not?

Compatibility issues – According to Microsoft's Windows 10 specifications page, it seems that if you're using Window 7 or Windows 8, those software and hardware will work fine with Windows 10. If your system doesn't qualify enough, then you're going to have to upgrade your hardware before you upgrade your operating system.

Though there are still some bugs, Window 1o has many great improvements that you can have a try.

I was in this kind of deep mess before I met [email protected] help me out...
He's so reliableI.