Galaxy Note 8 Features that You Can't Find on An iPhone

As Apple's 2016 and 2017 flagship, iPhone 7/7 Plus and the upcoming iPhone 8 are undoubtedly the biggest competitors to the newly released Samsung Galaxy Note 8. If you are wavering between Samsung and Apple, this post can help you make a better decision. There are seven features that you can have with a Galaxy Note 8, which can't find on an iPhone 7/7 Plus, not even on iPhone 8.

Stylus Pen, S Pen for short, a magical pen that you can use to select text, clip photos, draw and make notes on photos, has been exclusive to Samsung Note handsets. And this year, S Pen in Note 8 become smarter and more capable. With its Smart Select feature, you can use the pen to select and crop a video clip and share with your friend right away. Like this: 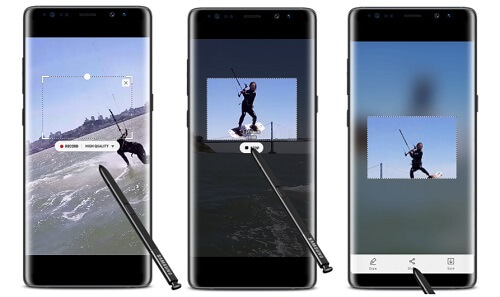 You can also draw your own emojis, write handwritten messages on photos and send them to your friends with S Pen. Besides being used in social media communication, S Pen can also be a tool to speed up your workflow. Note 8 introduces Screen off memo, which allows you to make note with S Pen without unlocking the phone. And in Note 8, S Pen is also equipped with magnification, translation, apps switcher features. If you want these S Pen features, you may prefer a Note 8 than an iPhone 7 or 8.

And Note 8's Live Focus not only allows you to take bokeh shots like what you can do iPhone 7/7 Plus, it also provides you live focus to adjust the level of background blur afterward.

Also, Note 8 has Dual Capture feature that takes photos of what's happening outside your focus.

With big screen becomes the mainstream, a smartphone can be a real battery hog, thus fast charging technology is adopted by many manufacturers to fix the quick battery consumption problem. Samsung has added fast charging support to its devices since Galaxy S6. The feature is carried on by Note 8. The Samsung phablet supports fast charging on wired and wireless, which is lacked in iPhone 7/7 Plus. It is rumored that iPhone 8 will be added with fast charging support. We'll wait and see.

If you are a fan of large screen, Note 8, which features the largest screen on a smartphone yet, will be your better choice. Note 8 comes with a 6.3-inch screen with 18.5:9 aspect ratio, which is much larger than iPhone 7 Plus's 5.5 inches. iPhone 8 is rumored to have a 5.8-inch screen but is far from Note 8's massive display. Along with the release of Galaxy Note 8, Samsung also launched Samsung DeX Station, a tool that can turn your Note 8 to a computer. After connecting Note 8 to a monitor, keyboard, and mouse via DeX, you get yourself an Android PC. You can't find such an equivalent for iPhone 7 or iPhone 8 in Apple Store. Note 8 is equipped with Iris Scanner, which you can't find in an iPhone 7/7 Plus (hope that Apple will add this feature to iPhone 8). And iPhone never supports expandable storage, and its upcoming iPhone 8 won't be an exception. If you need more storage for photos, videos, audios on your phone, you may choose Note 8, which allows you to expand storage with SD card.