Google has released the Android N Developer Preview already. The firmware is now available to install on Nexus devices, including the Google Pixel C, Nexus Player, Nexus 6P, Nexus 5X, Nexus 9, and Nexus 6. If you have one of those devices and you're interested in trying out Android N, read on!

Warning: The Android N developer preview is still a work in progress. So please note that the release might contain bugs, performance issues, app incompatibility, and poor battery life. We do not recommend installing the Android N developer preview on your Nexus device if you use it daily. But if you would like to experience new features of Android N, follow the instruction to get it.

1. Open the browser on your phone. Then go to http://google.com/android/beta.

3. Tap "Enroll device" next to the name of your device. 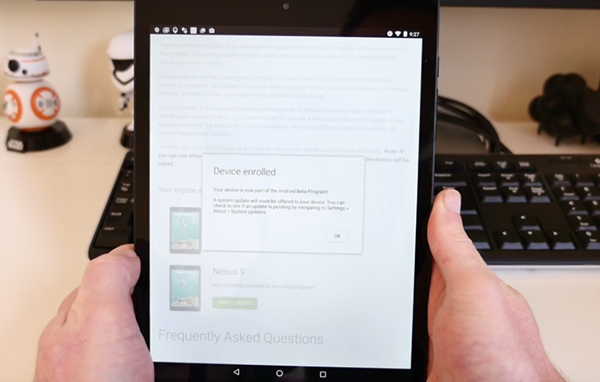 8. Once the update file has finished downloading, click the "Restart and install" button.

9. When installation is proceeding, you device will reboot several times. And the whole process will take some time. Just sit back and wait.

Done! Now that you have installed Android N preview on your phone, you can explore all kinds of new features of the new Android.

I installed on a Nexus 6P, but had to uninstall due to phone becoming slow and at times locking up.