Samsung Galaxy Note 8 is recently released, and comparing with Galaxy S8 launched earlier this year, what's new about the new flagship? Suppose you are thinking about giving Samsung a shot, which one should you buy? As Samsung's 2017 flagships, Galaxy Note 8 is very similar to S8/S8 Plus, yet there are upgrades of Note 8 that makes it the most expensive smartphone in Samsung's Galaxy lineup.

From the specifications, we don't see much difference. Galaxy Note 8 is more like a upgraded S8/S8 Plus with bigger screen, larger storage, an extra S Pen, and more importantly, a higher price.

S Pen is one of biggest selling points of Galaxy Note 8. As a feature that is exclusive to Samsung's Note serial, the S Pen, or Stylus, has received some upgrades this year.  S Pen can be used to to create hand-drawn emojis, make animated GIFs, or write handwritten messages on photos, making your conversations on social media more fun and personal. And screen off memo, which was introduced in Note 7, is revived in Note 8, allowing you to make note with S Pen without unlocking the handset.  And there are some small improvements, such as magnification and textual translation with the help of S Pen. 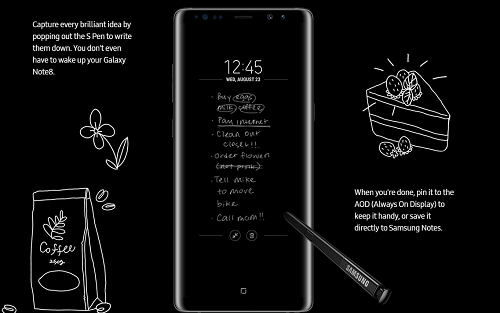 Stylus is the biggest difference between Galaxy Note 8 and Galaxy S8. You may be inclined to get a Note 8 if you want all the wonderful things that the S Pen can do.

Galaxy Note 8 beats Galaxy S8 with its enhanced camera. As dual camera becomes a trend in top-tier smartphone market, Samsung captures the trend and adds dual camera to Note 8. S8 and S8 Plus, on the other hand, is stick with with a 12MP camera. And Note 8's dual camera comes with 2x optical zoom and dual OIS(Optical Image Stabilization), while iPhone 7 only support OIS in one of its camera.

With dual camera, Note 8 also is added with more new features to its Camera app. Live Focus lets you take bokeh shots with the option to adjust the level of background blur afterwards. And there is another feature called Dual Capture, which can photographs what's happening outside the frame that you are capturing. In Note 8, there are more modes: Pro mode, Food mode.

Infinity Display continues to be used in Galaxy Note 8. And with the same Super AMOLED screen as S8/S8 Plus, Note 8 is a lot like S8 in display, only that Note 8 comes with a 6.3-inch screen, which is bigger than the 5.8-inch and 6.2-inch screen on S8/S8 Plus.

Note 8 also abandons physical home button as S8/S8 Plus did and makes the same mistake by placing the fingerprint sensor on the back beside its camera.

Conclusion: Does Note 8 Worth the Money?

Note 8 is very similar to S8/S8 Plus, from the inside to the outside. I guess Note 8's slogan "Do bigger things" tells us everything: Note 8 is just a scaled up version. It doesn't make any breakthrough comparing to S8/S8 Plus. If you are not a fan for S Pen, S8 or S8 Plus with larger storage should be your better choice.