How to Download Older Version of Apps on iPhone, iPad

"My iPad mini can't download the Netflix app from App Store because it's requesting for iOS 10 or later version. Is there any way to download an older version of apps on iPhone? Thanks in advance."

As early as 2016, on WWDC, Apple has launched iOS 10 beta and announced that some old model of iDevice couldn't be updated to iOS 10, including iPhone 4S, iPad 2, iPad (the 3rd generation), iPad mini (the 1st generation) and iPod Touch (the 5th generation). It is true that these devices can be in use continuously but the users will face some troubles; for example, some apps from App Store request for iOS 10 or later version, therefore, can't be downloaded on those devices. Are there any ways to download older version of Apps, for example, downloading an old version of Snapchat, Netflix? The answer is of course "Yes"! Follow the simple steps to solve the problem! 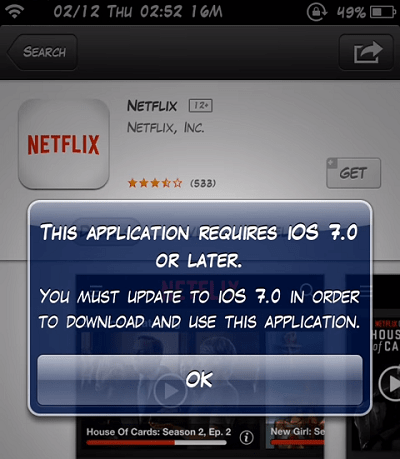 Now suppose that we need to download Netflix to an iPad mini, iPhone 4. When we touch "Install" directly in the App Store of the old device, it will pop up a message that this app is acquiring for iOS 10. To get older versions of apps, you need the help of another iOS device running on iOS 10 or above

1. Download the app in a device running on iOS 10 and above
To solve this problem, first, we need to find an iDevice that runs on iOS 10 and above, like iPhone 7/8/X. We take an iPhone X here. Then sign in the iPhone X with the same Apple ID with your old iPad Mini.

On the iPhone X:
If the app you want to download has been already purchased: launch App Store and find Netflix or any app that you want to download, then tap to let it download. If you cannot find the app, try tapping the "Purchased" tab at the right-hand corner, and all the apps that you have already bought will the listed on the screen.

If the app you want to download has not yet been downloaded: Launch App Store. On the bottom right hand, there is a search icon which you can touch to swift to the search field. You can search for Netflix by typing its name into it. Or you can browse the App Store to buy or download any apps that you are interested in. Tap "Install" to let it download to the iPhone X.

Tips: It is recommended to download the app that you have already purchased because that for a new app, you don't know whether it has an older version for iOS 9.

2. Get an older version of app on your older device
Let's switch to the older device iPad mini.

Now you must already have the older versions of apps that you want to install on your old iPhone 4S, iPad 2, iPad, iPad mini or iPod Touch. If you find this passage useful, please give us a like and more iOS solutions are on our websites!