Recently, there has been uncovered a pair of spy photos about iPhone 6c pink rear housing. We can see from the photos that iPhone 6c rear housing is still made of plastic, which looks like a combination of iPhone 5c and 5s on the whole. But the one with the color pink is more attractive to girls.

It was reported that Nowhereelse.fr firstly disclosed spy shots about iPhone 6c rear shell on the morning of March, 31st. And colorful back cover has still been used in the design of iPhone 6c, while the shape of flashlight and loudspeaker has change for a bit, which makes it more like a combined version of iPhone 5s and 5c.

Nowhereelse.fr disclosed another picture about iPhone 6c rear housing after so many times of successfully uncovering secrets about components of iPhone. It said that the shot was more trustful as it was from supply chain.

The size of iPhone 6c is probably 4 inches just as usual compared with your palm. Just like iPhone 5c, iPhone6c also uses the color pink yet the design and the streamlined shape have just changed little. 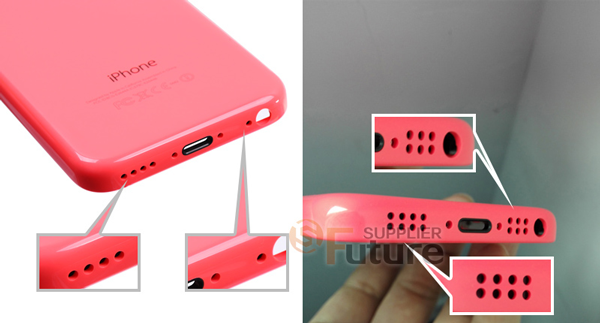 The comparison between the bottom of iPhone 6c and iPhone 5c: the opening of flashlight that next to the camera has transformed from ball-like to capsule-like which is the same to iPhone5s. And it means that Phone 6c has employed the double-color temperature flashlight. Besides, the loudspeaker is double row now instead of one row which is the same as iPhone 5s. Therefore, the Media inferred that iPhone 6c has adopted the same body construction as iPhone 5s.

Because no frontal spy shots have been disclosed, it is unknown that whether its front side is carried with Touch ID or not. If that’s the case, iPhone 6s can be called as plastic iPhone 5s.

Before, some Media claimed that Apple would announce three kinds of iPhone on September this year, including iPhone 6s, iPhone 6s Plus and iPhone 6c. Now what they have claimed seems to be proved by the uncovered spy shots.

I was being patient for several months hoping my spouse could change from his lies and cheating attitude, anytime i confront him he denied of been cheating, i needed to get the proof myself and i did get the proof i needed with the help of this man called Ghoost, he gave me direct access to my spouse phone without him knowing, i started receiving his whatssap messages on my phone and i showed my spouse the proof that he was cheating and we needed to breakup cuz i can’t take it no more. Thanks to this Ghoost for helping me out on this issue, i mailed him via the emaill below.
LORDGIFTSPY @GMAIL

She helped me hack my husband whatsapp,and i can get access to her chat messages, She also good of changing school and university grades,hacking into your cheating spouse phone, to someone who is trying to blackmail you and etc.His services are top class! You can contact her LORDGIFTSPY AT GMAIL

i bet with his is better for your job.

She helped me hack my husband whatsapp,and i can get access to her chat messages, She also good of changing school and university grades,hacking into your cheating spouse phone, to someone who is trying to blackmail you and etc.His services are top class! You can contact her GHOSTCYBERHACKER01 AT GMAIL